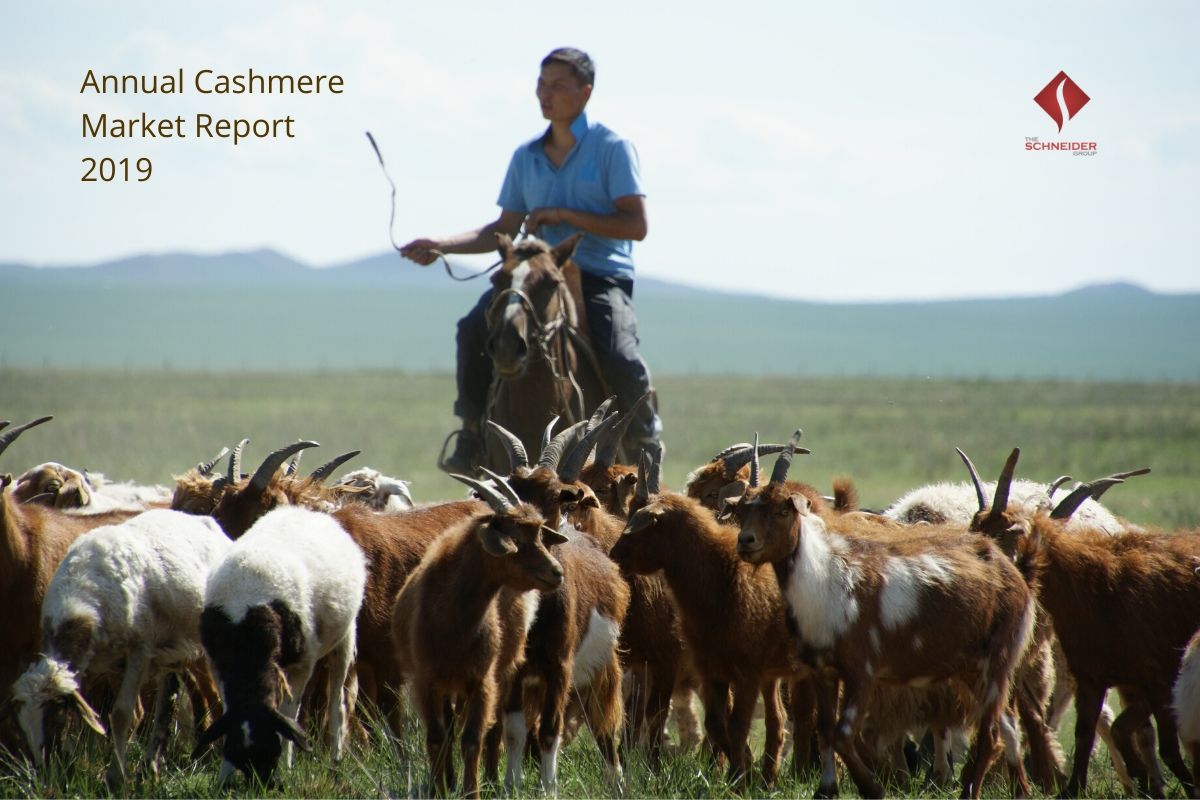 At the beginning of 2019, demand for cashmere was still good. With the reduction in production, the price of cashmere rose significantly in April and May in conjunction with the arrival of the new season.  From June to July tariffs were increased due to the Sino-American trade war.

In addition, in 2019 the price of lambs rose by about 15% to 18%, which led to a further reduction in cashmere production.

Starting in August, demand for cashmere decreased significantly, leading to a reduction in prices until the end of the year. Most Chinese factories have ceased production.

For the next season, all factories should return to regular operation only from March due to the Coronavirus problem. If demand returns, prices may rise again, especially for fine/beautiful types.

The extreme winter conditions and the dry winter of the Mongolian territory have caused extensive losses of livestock, despite which the shepherd communities have tried to survive as much as possible. As there is no rain, the wind dries the grass and the animals are leaner than usual.

Last year, Mongolia produced 8.066 tons of clean cashmere (90% of total cashmere production) which was mainly exported to China and 408.5 tons of dehaired cashmere (the equivalent of 817 tons of greasy cashmere). The main importers of dehaired cashmere were Italy with 342 tonnes, England 46.3 tonnes, Germany 3.8 tonnes, India 5.1 tonnes, and other countries 11.3 tonnes. 90% of the whole production was first-stage processing, with final product manufacturing only accounting for 10%.

Both Mongolian and Chinese traders hoped that prices would remain as high as in 2018. The strengthening of the RMB gave Chinese traders the opportunity to get cashmere at a reasonable price.

In the future, the Mongolian government will promote value-added products for export.

On July 26, 2018, Representative Ted Yoho and nine other members of the US House of Representatives delivered a trade bill to the US Congress. The bill would seek to promote trade between the United States of America and Mongolia by allowing duty-free trade for certain imports from Mongolia, such as cashmere products and textiles.

The trade act would help the Mongolian economy to open more business opportunities to export cashmere products to the U.S. market. Mongolia supplies about 48% of the total greasy cashmere to the world market, making the country the second-largest supplier of greasy cashmere in the world, but uses only 15% of it to produce ready-to-use finished cashmere garments locally.

The remaining 85% of greasy cashmere is sold as semi-finished products to other markets with lower added value, which is becoming the focal point of the Mongolian government and domestic cashmere producers.

The United States of America is considered the second-largest consumer of finished cashmere garments. This duty-free treatment would open up a huge opportunity for Mongolia to diversify its economy.

For Iranian cashmere, the year 2019  started with predictions of price increases similar to the previous year. However, most traders ignored or preferred to ignore, that any price increase in 2018 was due to strong fluctuations in the value of the local currency against international currencies, caused by the economic sanctions imposed on Iran by the Trump administration.

The value of the local currency halved during 2018, and in some periods it even lost two-thirds of its starting value. The cashmere market was not so rigid in 2018, so Chinese traders took the opportunity to use their expensive dollars and rushed into the Iranian market. The result was an increase in the price of Iranian cashmere at a rate of 400% in local money but only 50% in USD.

In 2019, the international cashmere market began to collapse with prices falling sharply, again perhaps due to the sanctions imposed by the United States on many Chinese goods.

Chinese traders have not been seen often on the market this year if not only occasionally and only to test the market in Iran. The local currency has also reached a stable level. Therefore, both factors that generally influence the rise in prices have been absent.

Although once again there have been ups and downs in the value of the local currency, the market has seen a stable price structure in terms of both Rials and USD throughout the year.

Traders, who had bet on price increases, bought large quantities at high prices and were unable to dispose of their stocks.

As a result, not much was sold last year and a lot of stock has been maintained for 2020, but the price is still high. This has caused Iranian cashmere to lose its market and there is not much hope for the new season unless the arrival of the new shear in April forces traders to start selling their leftovers at a loss to stay in the game.

Again, much will depend on Chinese traders and also on the devaluation of the local currency, although it now seems stable, the tighter sanctions envisaged could lead to further devaluation and again to a sharp rise in cashmere prices in Iran.

In October, the price of finer type cashmere decreased again by about 10%, but with a consistent regain in November. Compared with last year’s 2018 October to November, the price of cashmere fibres reduced around 30%, due to a weak market. On top of that, the production volume is a bit higher than last year. In this case, the supply is higher than the demand. On the opposite, the price of lambs in 2019 is much higher than last year, which means farmers can compensate their revenue by selling mutton. Since the cashmere is easy to be stocked, the farmers are waiting for better prices to sell. The US is the largest market for exporting Chinese cashmere. Due to the trade war with the United States, taxes for exporting cashmere to the USA increased. As the economy becomes weaker, the market for cashmere continues to be very bad.

Also, in Mongolia, the market has come to a standstill without significant movements. After the continuous decrease in prices between September and October, the prices are now stable. Compared to November 2018 the general prices have dropped by around 10 to 15%.

The market in the Middle East has been completely stuck, with no transactions. Chinese traders approached the market in November hoping to use this quiet situation but could not convince traders to sell at their desired prices and left leaving a low bid which has not been met by any seller.
Prices are down in local money but still high in terms of hard currency, which still leads to Middle Eastern dehaired cashmere prices being relatively competitive with Mongolian prices.

After a crazy collecting period during the last 2 to 3 months, the traders now have enough stock. At the same time, demand is still not good. The price of cashmere is 10% less than July 2018. Compared with prices in June, the situation is basically unchanged. For finer cashmere types, the price is still on the high level because of limited availability. The prices for low and medium qualities should come down shortly. Recently the RMB has been getting weaker, due to the trade war between China and the US. This is offsetting some increase in prices.

Mongolia is still the second-largest producer of cashmere in the world with 10.000 tons of greasy cashmere.
From 2015 to 2019 the cashmere production was constant and almost 90% of whole cashmere production is exported to foreign countries (89% exported to China and 11% to European countries).
Main importers in the EU are Italy, the UK, Germany. However, globally the main players are always Chinese buyers.
In the first 7 months of 2019, almost 75% of cashmere was exported. Compared to July 2018 the exported quantity of cashmere has increased by 5.2%.
The cashmere price has been stable over the first five months of the season and now it is expected to follow the EU/Chinese market trend for the next months.

News of a poor international market and low prices of Mongolian stock in Europe has reached the Middle East and has at least halted the price hike. Although no Chinese buyers are present in the market now, the market is still stable and no trader is willing to reduce its prices and sell with a loss, hoping that prices will strengthen again after the European summer has ended.

Due to high prices during the last cashmere season, cashmere demand declined noticeably compared to July 2018. During February and March 2019, prices had reduced slightly. However, once the newly harvested greasy cashmere entered the market in April 2019, prices increased once again reaching the high levels of December 2019. Momentarily the market is quiet due to low availability of cashmere, especially finer fibres. Brokers and processors are nevertheless buying the new season’s offerings even though demand further down the supply chain is still poor.

This year the greasy market has opened 13% more expensive compared to last year. Winter has been very dry and without snowfalls, causing high presence of dust, low yield and lower quality in greasy cashmere. The cashmere growing regions have still not had any rain.
Demand for Mongolian cashmere is coming predominantly from China while European buyers have not yet expressed any interest in Mongolian cashmere.

Due to very a very unusual spring climate with cold temperatures as well as rain across the whole country, cashmere goats have not been clipped yet. The small quantities being traded these weeks are unsold stocks from last year. Prices have remained unchanged compared to March 2019.

After the Chinese New Year in the middle of February, the price for cashmere has been increasing steadily. Also in March, the price increased by around 10% compared to February. Compared to March 2018, the price is 30% higher. The demand for cashmere seems also to go up a little as the new season approaches.

So far the market in Mongolia has been quieter compared to last year. Annual production of cashmere is estimated around 9.000-10.000 tons of greasy. Snowfalls have been completely absent throughout all winter, resulting in worse and dusty quality, with a lower yield. But contrary to expectations the season has started with prices 13% more expensive than 2018.

A slight decrease in price is expected due to lack of quality during the next few weeks. Main buyers are Chinese as usual.

The market was quieter than usual during February/March because for over one month, export of all types of cashmere was banned. This was a government decision in support of the local carpet industry which had asked for a ban on wool and authorities had mistakenly prohibited cashmere export as well. Removing this directive took a long time and as a result, purchase was minimized. February/March is the period for tannery and now some good tannery is left unsold which may be mixed with spring clip lowering the final yield.

By the time this ban was repealed, the end of the season had already arrived and the market is now waiting for the new clip which usually should be out in April/May. But very heavy rain all over the Middle East will delay the new clip and it is now anticipated that new arrivals will be only available in May.