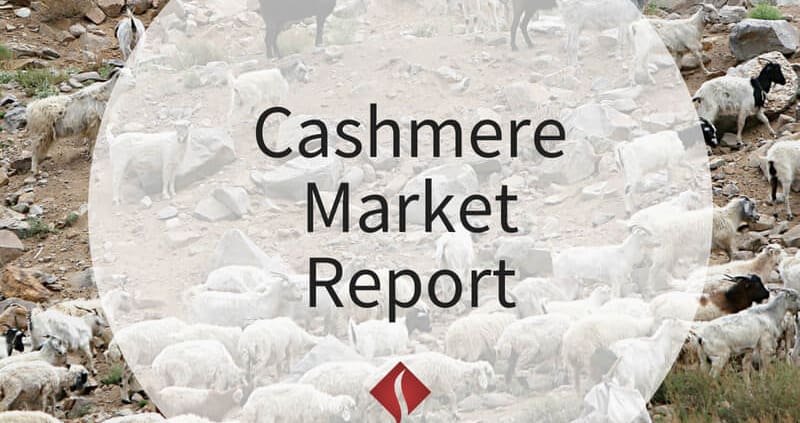 2019 had been already a tough year for the cashmere industry all around the world. From the middle of February 2020, some dehairing mills were starting to receive some orders, but with the spread of COVID-19 and the subsequent worldwide lockdown all these orders have been canceled. In April, the price for cashmere decreased by about 15% compared to January. The production had been similar to 2019, but the mills have been forced to stay closed until the beginning of June, initially due to pandemic and later on because of the complete lack of demand for cashmere.

In June and July, most of the top makers had to stop their mills, but spinners were struggling since they had to keep spinning to pay their workers. The price of cashmere yarns reduced by around 18% compared to the period before the Chinese New Year.

The market in China slightly increased only at the beginning of March after Chinese New Year, when top makers producing the orders booked in November and December 2019. But as the pandemic spread all over the world from the middle of March, the entire market went down sharply and everyone had to slow down the business. Luckily, China has been able to reduce the losses caused by the virus, as the mills received big supports from bank loans and a tax break. The government promoted encouraging consumption policies after the lockdown was over at the end of March, trying to support the local market.

The annual inflation rate in Mongolia slowed to 2.1 percent in August of 2020 from 3.4 percent in July.

Mongolia exports of wool, animal hair, horsehair yarn, and fabric was US$362.82 million during 2018.

Due to the frozen situation of the global market, the GDP of Mongolia has shrunk by 6.1 percent.

According to the Mongolian statistical office the livestock in Mongolia is continuing to increase, arriving at 30 million goats (from a total of 70 million animals), the total production of cashmere arrived at 10.000-12.000 million kg of greasy.

The Mongolian government has announced an MNT 300 billion (USD 100 million) loan package to support its cashmere industry to face the coronavirus pandemic, with one condition that cashmere processors have been offered loans to buy raw fiber at a minimum price of 100,000 MNT/kg equivalent (38$/kg). The Mongolian cashmere market was almost firm from March-April 2020, nobody was accepting last year’s price.

The cashmere market is a strategic business in Mongolia because it involves 230.000 herding families and their vote for during an election is very important. This is why the Mongolian government promised 38$/kg for greasy cashmere, to obtain the herders’ vote. But after 2 months of negotiation and delays, the cashmere price has dropped to the real market price. The Mongolian government tried to maintain these high prices, but there is no demand on the international market.

The Mongolian government has issued subsidies to herders of about $7 per cashmere goat and offered processors lower interest rates on subsidized loans provided they purchase the raw material at 2019 prices. As soon as the herders received subsidies from the Government they stopped selling the cashmere and waited for the better prices close to 2019.

Due to the COVID-19 lockdown, Mongolian borders were closed from the end of January until now, nobody can travel to Mongolia and Chinese traders are missing. The shipments of scoured and dehaired cashmere to China and overseas have been delayed.

In 2007-2008 during the financial crisis the price fell down by half, the same situation is repeating this year.

In February just before the widespread COVID-19 outbreak, some Chinese, Afghan, and even Pakistani traders had bought in Iran some lots hoping to take benefit from depreciated local money and this strengthened the prices. Then in March, the worldwide outbreak of pandemic shattered the markets and this coincided with the Iranian New Year holidays. All of the above factors caused silence on the raw market.

Usually, in February new clip start appearing in the market and the battle of pricing begins, but this year’s market was absolutely dead with no news on prices and availability.

In May, prices in Iran dropped like everywhere else. To start, there was resistance but since no Chinese buyers came to purchase, prices gradually came down. Surprisingly, though, the final prices of raw Iranian cashmere were higher than Mongolian cashmere ones. By the end of June, some Chinese buyers have appeared again and their purchases put an end to declining prices although their purchase intention was only for limited volumes. The Chinese traders could benefit from free-market currency which was at least 25% more expensive than Iranian export currency.

In July, the Chinese, Afghan, and eventually Pakistani traders began to buy in Iran enjoying weak local currency. The Iranian government tried to stop this situation by blocking the export of raw cashmere, which was possible with some duties to be paid. Since this governmental intervention, important quantities bought by Pakistani traders destined for China, are now stuck and cannot be delivered.