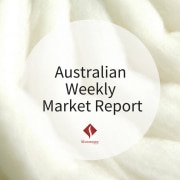 It was an exceptionally positive market this week. From the opening lot, it was obvious that there was sufficient prompt demand and prices remained strong from that point on. 18.0 micron and finer were keenly sought after, particularly those with better style and specification. Those more suited to the Italian weaver market. Chinese interests were active and at the close the average Chinese specification types were most affected by the strengthening tone. Wool sold this week would not be due for arrival into China until late March so we would have to assume that wool will be flowing again by then and production back to some normality.

Some of the smaller regional brokers offered support this week by extending the prompt date out one extra week. This is expected to continue for the next few weeks at least. This change is to allow exporters some leniency with cash flow while the situation in China has resulted in a tightening availability of cash. This initiative has been well received by exporters and this gesture of industry cooperation has been well acknowledged and assisted the positive market reaction.

Our Authentico indicator has reached the highest point since we established it in July 2019. The previous peak was week 02, July 2019 at 2247. The Indicator is now at 2265. The strength can be attributed to the recent form of best fine wool types that have been in strong demand, particularly those with good specification and processing performance. We are of the opinion that there are less better-quality wools finer than 17.5 micron than in the previous few seasons and this is impacting positively on the market price for best fine wool. No doubt the impact of the drought in the New England region has been the greatest contributing factor.

There is a designated Tasmanian feature sale scheduled for next Tuesday. We are aware of some very suitable fine and super fine wool clips that have been kept for this sale. This should encourage strong support from Italian interests. Supply of best fine wool often shows a peak in February before dropping off considerably through until August.