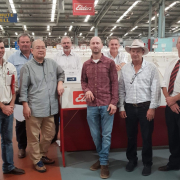 On 1 May 2019, the 19,3-micron fleece bale was auctioned in Sydney and the spirited bidding resulted at 2000 AUS$ cents (3053 AUS$ cents clean). The bale was purchased by Schneider for Motohiro Japan. All testing and selling costs were covered by Elders.

Although shearer Josh Clayton stayed only 14 sheep short of breaking the single stand shearing record, he managed to raise 13,000 AUS$ in total to assist people suffering from MND. Josh lost his partner to MND in November 2018 and has committed himself to raise as much money as he can to help other MND patients. Josh and his young daughter attended the wool auction in Sydney and addressed the wool traders prior to the auction. Motor neurone disease is an uncommon condition that affects the brain and nerves. It causes weakness that gets worse over time, significantly shortening life expectancy. Momentarily there is no cure for MND and further research about the disease is needed.

It was an honour for the Schneider Group to be able to support the cause and we kindly thank our customer Motohiro Japan for their generous support by purchasing the MND charity bale.